IRON MAIDEN WILL RETURN TO HUNGARY

The Book of Souls World Tour is an upcoming concert tour by Iron Maiden, held in support of their sixteenth studio album, The Book of Souls. The band will perform in 35 countries across six continents, which will include their debut performances in El Salvador and China. They will open the tour in Fort Lauderdale, Florida on 24th of February 2016, playing nine shows in total, finishing up at The Forum in Los Angeles on April 15th before heading to Mexico and South America in March. After their concerts in Canada, Japan and China in April they will go to Australia, New Zealand and South Africa.

The band's first European show during the tour will be held on 26th of May in Germany. They will perform in Austria, Switzerland, The Netherlands, France, UK, Norway, Sweden, Belgium, Denmark, Lithuania, Russia, Finnland before heading to Hungary - Iron Maiden has just announced today on facebook that the band will headline at the hungarian Volt Festival in Sopron on July 1st. 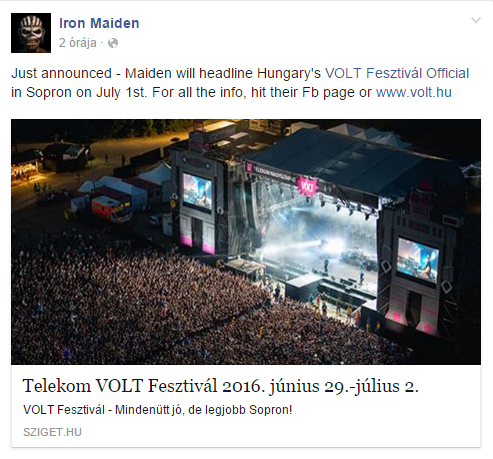 Tickets for the concert in Hungary here.

ADELE HAS ANNOUNCED A TOUR IN EUROPE